The Values of Others

Not to be confused with the value of others!

The other day I was asked to provide a short clip explaining why I’ve (pre-)volunteered for human challenge trials. I’ve talked about it in a few different places at varying lengths but here they just wanted a sentence or two to go in a story on HCTs alongside clips from other volunteers on a show. Neat!

The org rep asking for the clip mentioned that the show is right-leaning and what immediately came into my head was Jonathan Haidt’s moral foundations theory — what values should I appeal to to convince conservatives that HCTs are a good idea? I have a number of reasons I’m volunteering, there are a number of reasons that are valid, and there had to be a great gem that fit both of those!

In the end I decided against it. Instead I said what I’ve basically said to everybody: that the benefits to everybody far outweigh the personal risk. I could have tailored something to appeal to conservative values: “The economy is fucked, our children will be paying for it for years, every day counts.” But I didn’t. I felt weird appealing to the values of others.

Is that the right call? It seems like common-sense to appeal to the values of others, in a Dale Carnegie way. Show people why they should agree with you! People don’t care about your values, they want you to appeal to theirs!

On the other hand… 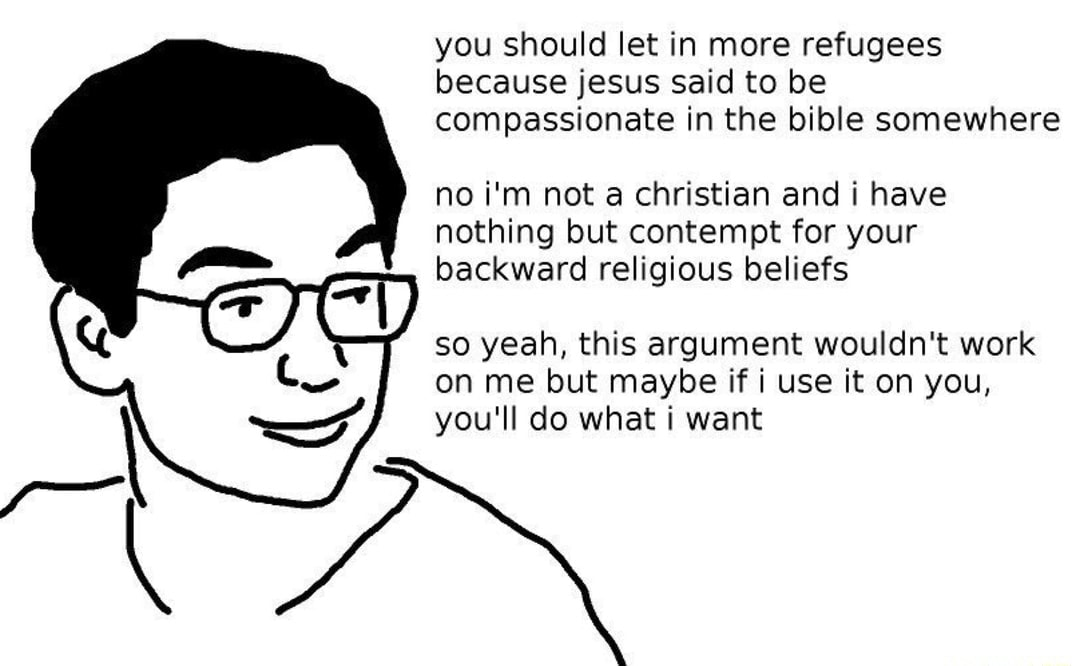 Interactions this condescending don’t happen often outside of memes but I think it points to something in how we try to talk across political tribes. I feel less and less convinced by this approach and more concerned that it’s slimy.

Here’s how I currently see it: It’s not fair to ask misguided people to be a bit less wrong in a way that benefits you instead of asking them to stop being wrong. Imagine that you walk in on somebody stealing from the shared cookie jar—something you would never do—and you tell them that you’re not a thief, but if the thief you just encountered could pass you a cookie you’d appreciate it.

What would be better? Just tell them to stop being a thief!

Think about the common dichotomy of ‘speech’ and ‘violence’. There’s trying to smack your opponents and then there’s trying to convince your opponents. But there’s also a third option: trying to exploit your opponents. The best metaphor here might be a network security one. When you try to convince your opponent you are trying to upgrade their system, in whatever way. Your version is more efficient, more secure, whatever, and you think the network is better if any node is better. In contrast, when you try to use people’s values against them, you are treating their values as a back-door exploit to use their resources.

There are nicer and less nice ways to convince, of course, and there are meaner and less mean ways to exploit. But there aren’t any good ways.

In A Connecticut Yankee in King Arthur’s Court, the main character, teleported back in time, uses his knowledge of a historical eclipse to trick the King into believing he has immense power. I don’t see a difference between this form of exploiting beliefs and what people do to each other when they tell each other something is “really in their interest”. If you think somebody is wrong, don’t appeal to their wrong values. Maybe instead it would be more decent to tell them that their value system just doesn’t work.

This might explain why I like liberalism and dislike acting like every perspective is valuable. I like the idea of everybody having to convince each other instead of hitting each other. But I don’t like the idea of finding the value in every position because some positions are fundamentally misguided and everybody but the believer knows it. Desiring for people to retain dysfunctional beliefs is a lot like not wanting your children to grow up.

So go forth! Stop treating people’s values as means to your own values. Either be honest about what you want or leave them be!